Cavendish bananas at a grocery store, by Jennifer Reutens-Hernandez

Panama disease has affected millions of hectares of land devoted to growing bananas across the entire planet. This disease is estimated to have caused over US $2 billion dollars worth of damage in the 1950s and, in present times, this estimate of destruction is ever-increasing (Ploetz, 2015a). Panama disease is devastating because many people across the world enjoy bananas as a snack food, or may rely on bananas as a primary source of sustenance (Ploetz, Kema, & Ma, 2015d). For example, an average Ugandan consumes 240 kg of bananas each year, compared to the average American who consumes 11.9 kg (Wageningen University & Research [WUR], n.d.). Only 15% of bananas are exported out of the countries where they are produced in order to turn a profit for farmers (Ploetz et al., 2015d). The remaining 85% of bananas produced are distributed at a local scale as a significant food source by smallholder farmers (Ploetz et al., 2015d). Bananas are no strangers to pathogens and are currently threatened by Panama disease, a fungal blight that has decimated countless banana plantations. 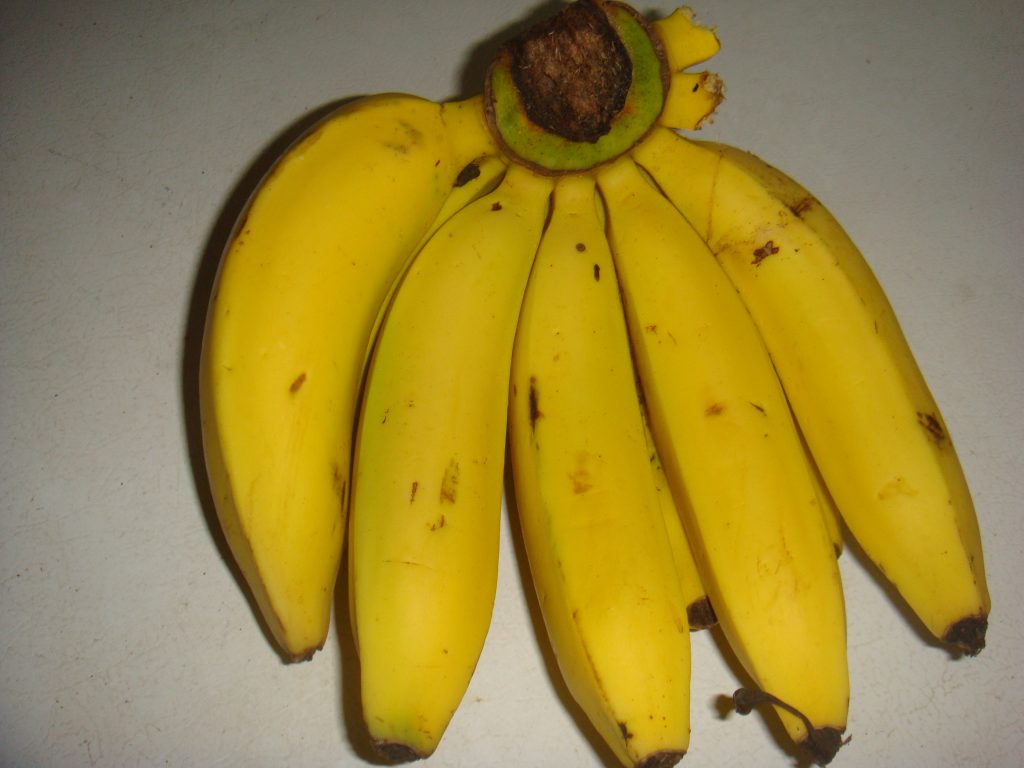 The culprit behind panama disease is the fungus Fusarium oxysporum f. sp. cubense (Foc) (Ploetz et al., 2015d). There are currently three known pathotypes of Foc that are host-specific to bananas. Race 1 which affects the Gros Michel, race 2 which affects ABB cooking bananas, and race 4 which affects the same hosts as race 1 and race 2 with the addition of Cavendish bananas. Race 4 is further categorized into subtropical race 4 (SR4) which affects susceptible cultivars in the subtropics and tropical race 4 (TR4) which affects the same hosts as SR4 in tropical areas. TR4 retains its infectivity regardless of temperature. SR4, on the other hand, is thought to need cooler temperatures in order to become viable and infect hosts. Race 3 affects Heliconia spp. (relatives of tropical American bananas), and is not considered to be a banana pathogen (Ploetz et al., 2015d). There is a high degree of genetic diversity among Foc fungus subtypes. This variety serves to complicate efforts to understand mechanisms of infection used by the fungus on different hosts. 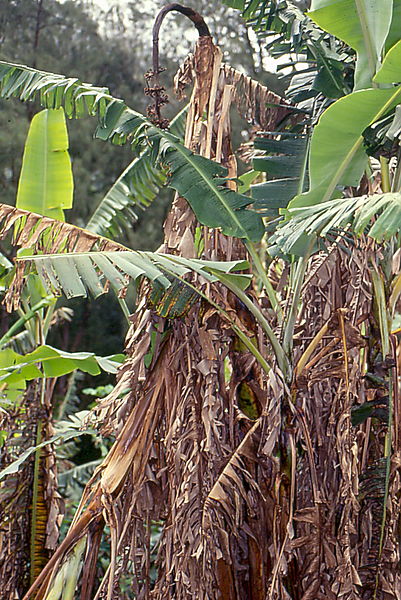 It is recognized that Foc has multiple strains, but the symptoms that manifest among different banana host species, when infected, are relatively similar. The fungus initially infects feeder roots and then travels to the rhizome, ultimately settling in the pseudostem of the banana plant (Ploetz, 2000). When a cross-section of the pseudostem is examined after infection, the xylem is a red to brownish colour, a sign indicating that the fungus is impeding the transport of water within the plant (Ploetz, 2000). Visible external symptoms begin with the oldest leaves yellowing due to the effects of fusaric acid produced by Foc (Ploetz, 2015a). Longitudinal splitting of lower outer leaf sheaths on the pseudostem is an additional sign of Foc presence (Ploetz, 2000). As the disease progresses, the base of the plant begins to wilt and symptoms appear in younger leaves. Eventually, all the leaves die, vascular system failure occurs, and the plant falls over (Ploetz, 2000). Foc chlamydospores allow the fungus to survive hostile conditions until favourable parameters for infection, a new abundance of susceptible hosts for instance, materialize (Ploetz, 2000). It has been documented that these spores can survive in soils for at least 20 years and, in some cases, up to 40 years (Ploetz, 2000). Since Foc can lie dormant in soils for decades, numerous banana plantations with a history of Foc infection have been either destroyed or abandoned (WUR, n.d.). 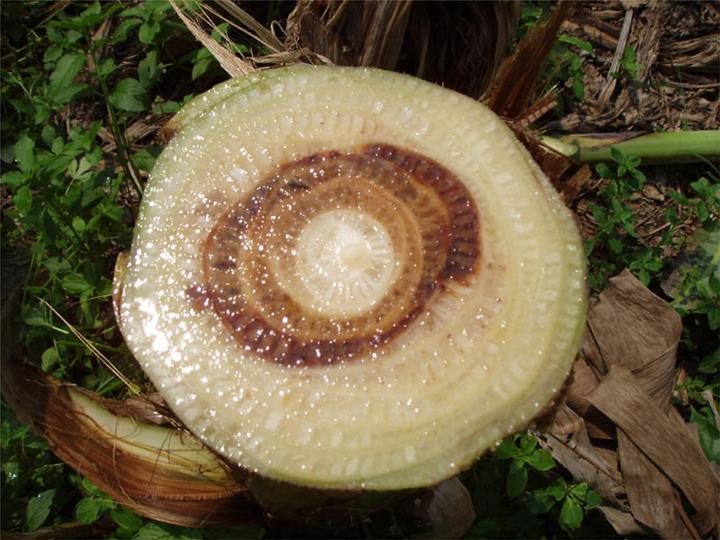 The initial propagation of Foc race 1 through Indonesia, Malaysia, and Australia in the late 1800s and early 1900s saw the devastation of Gros Michel banana crops in these regions (WUR, n.d.). The Gros Michel banana featured a significant lack of genetic diversity. Virtually every single banana was a clone of its fellow species members. Such monocultures are far more susceptible to infection by pathogens than genetically diverse plant communities as no individual plants in the former populations present genetic resistance to infectious agents and disease can spread rapidly throughout them as a result. Farmers began to abandon plantations where Foc race 1 had spread to and established new plantations  However, their success was short-lived as the fungus quickly took hold in these locations as well. Following increases in international trade, panama disease appeared in nearly all countries that produced Gros Michel bananas, compromising the livelihoods of millions of people (WUR, n.d.). To add insult to injury, chlamydospores made soils in many of these countries uninhabitable for the Gros Michel banana (Ploetz, 2000). Finally, a solution to save the banana was reached: a cultivar resistant to Foc race 1, the Cavendish banana was developed (Ploetz, 2015b). 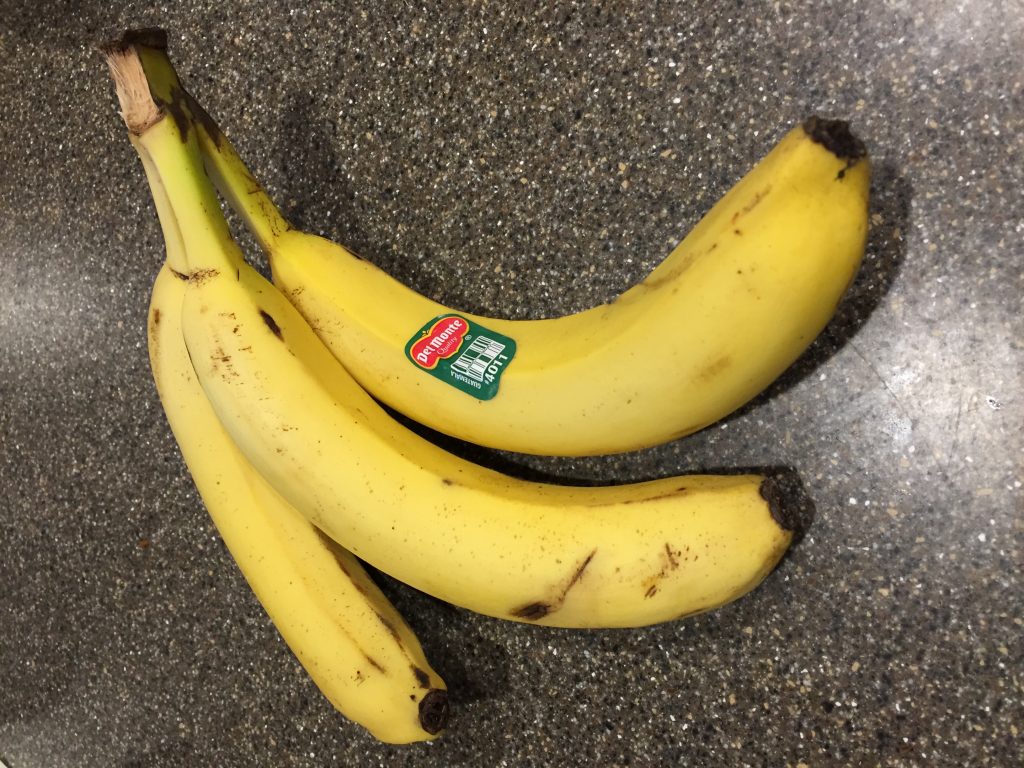 In the early 21st century, Foc TR4 was reported to affect Cavendish banana plantations in Indonesia, Malaysia, Australia, Taiwan, China and the Philippines (Molina, Fabregar, Sinohin, & Viljoen, 2009). Additionally, TR4 has been identified in plantations in Jordan, Lebanon, Oman, and Pakistan and is expected to spread through the Middle East quickly due to a lack of regulatory practices regarding agricultural food crops (Ploetz et al., 2015c). These recent outbreaks have re-established the importance of learning about the Foc fungus and created management protocols to prevent further Panama disease epidemics. Banana growing countries in the Western Hemisphere have developed impact-reduction strategies in the event that TR4 is transmitted from the East (Ploetz et al., 2015c).

Researchers have been examining ways to detect, manage, and prevent the spread of Foc in soils. Recently, Aguayo et al. (2017) enhanced a method to detect the 0121 category of vegetative compatibility groups, primarily 01213 and 01216 which is found in the TR4 strain using real-time PCR. Vegetative compatibility groups describe fungal strains that are able to combine and create a stable heterokaryon, which means they can sexually reproduce and are compatible (Ploetz & Correll, 1988). Additionally, disease suppressive soils have been studied to determine if there is potential to change the soil where Foc is already found. Xue et al. (2015) examined disease suppressive soils in the Hainan province of China and isolated Bacillus amyloliquefaciens NJN-6 as a primary control agent against Foc. The authors incorporated this microbial species into a bioorganic fertilizer to be applied to the same banana plantation where the soil was derived and the results indicated that the fungus was suppressed by 68.5% in terms of its presence in the soil. The output of banana products doubled in yield following application of the Bacillus amyloliquefaciens-infused fertilizer (Xue et al., 2015). Furthermore, Zhang, Mallik, and Zeng (2013) examined the chemical components involved in the ancient Chinese practice of intercropping bananas with Chinese chive (Allium Tuberosum Rottler). The authors found five antifungal compounds that may be released into the soil when Chinese chive is present. This finding supports advocacy for increases in biodiversity in banana plantations and decreases in monoculture crops to improve the yield of banana production and decrease mortality of banana plants to Foc (Zhang et al., 2013). Dale, Paul, Dugdale, and Harding (2017) highlight the potential and pitfalls for genetically modified bananas that have an incorporated resistance to Foc. The authors believe that modification of known resistant cultivars is the best way to maintain banana sustainability (Dale et al., 2017). This conclusion is further supported by Li et al.’s (2015) study that found six genes present in wild banana species that are resistant to TR4, which could be beneficial to incorporate when studying genetically modified bananas.

If eliminating Foc TR4 proves impossible in the future and the fungus reaches epidemic proportions, a banana cultivar resistant to TR4 may be employed across the globe which would replace the current Cavendish cultivar. Smallholder banana farmers sell and consume a variety of edible banana cultivars in order to make a living and have food to eat (Ploetz et al., 2015d). The pickiness of banana consumers may complicate efforts to preserve the multibillion dollar banana exporting market (Ploetz, 2015b). Banana connoisseurs want bananas have familiar shapes and distinguishing sweet tastes (Ploetz, 2015b). If the banana exporting industry is to continue its success, consumers must be open-minded about the bananas of the future, especially if Foc is not controlled worldwide. Additionally, humans should be wary of other animals that eat bananas as a food source. What will all the primates eat if we cannot rescue the banana production measures that have been compromised by the Foc fungus?

This work by Jennifer Reutens-Hernandez is licensed under a Creative Commons CC-BY Attribution 4.0 International License.