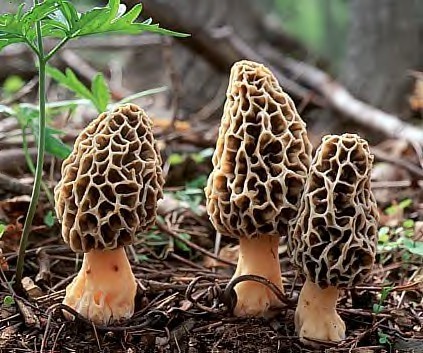 Today’s blog post is about one of the world’s most renowned food item; the blushing morel. This iconic fungus is a delicacy many parts of the world, one of the most delectable foods that are routinely and vigorously sought out for its delicious taste and exquisite texture. It should be noted that it is the mushroom itself that is being sought for and not the entire fungus itself; its fruiting body is the component that is the edible portion.

Morchella rufobrunnae, or better known as the red-brown blushing morel, have not been uniquely identified as its own species until 1998 in the Xalapa region of Mexico by a group of mycologists lead by Dr. Gaston Guzman. After it was further analysed using ribosomal DNA sequencing techniques, and interestingly it was later determined that the blushing morel did, in fact, grow as the predominant morel fungus in several other areas across the globe prior to its identification. The morel genus provides enough weight as economic value for Mexico, exporting to Europe and the United States of America (U.S.A.), however the increase in its exploitation and the destruction of the fungus’ habitat have forced the Mexican Government to create appropriate countermeasures to ensure the preservation of the blushing morel’s habitat and regulate its exportation. However, this hasn’t prevented other countries from discovering and outsourcing their own morels: after Guzman et al posted their results many other mycologists and biologists from across the globe were able to compare their research findings with those taken from Mexico, confirming that the re-brown blushing morel did indeed grow in other countries. Based on these results, the fungus has niches throughout the Pacific Northwest of the U.S.A, in Northern Isreal, Cyprus in Greece, and even in Australia.

The study of morels has been counter-productive and lacking through the 1960’s up to the early 1990’s. There was no general consensus to properly identify morels when they are categorised as separate species. Up until 1987, at least 28 different species of morels were described until the innovative ribosomal DNA sequencing technique arrived. The reason for having so many wildly different species classified is due to a morel’s tricky morphology. Even within a species, the morphology is not consistent, where the fruiting bodies themselves show variously different shapes, colours, and ridge arrangement. The ribosomal DNA sequencing technique was able to cut down the number of previously know species down to 3 “true” morel species: Morchella rufobrunnae, Morchella distantes, and Morchella esculenta. These three species are currently internationally accepted and acknowledged as separate species, however, there is still current stipulation that there are more species of morels. Morchella rufobrunnae, the blushing morel, is the most popular of the morel genus as it is the largest and most abundantly found morel in nature. This gives the fungus a lot more credit for its consummation than its peers; the larger size and higher abundance equates to having more to eat! But, a roadblock is preventing harvesters from continually harvesting this fungus. The blushing morel is very particular to where, when, and how it should be growing.

This is the roadblock is the biggest reason why harvesters, and to this day, still haven’t been able to fully cultivate the blushing morel as a crop. It is this aspect that is driving the price of the blushing morel’s price per pound to be quite high, the highest selling to $45.00 per pound! Crop growers and mushroom enthusiasts have dreamed of finding a way to grow and harvesting the blushing morel for a lot longer than their estimated life cycle, even by an extension of a few extra weeks. It wasn’t until 1985 when Ronald D. Ower, a biologist from San Francisco, had developed a patent of a design to which it would be able to grow, nurture, and cultivate the fruiting bodies of the blushing morel at any time during the year. The patent itself provides a more detailed analysis of the methods of promoting fruiting body development, but here is the essential run-down: the soil environment for which the sclerotia (the fungus’ mycellium with food reserves) is to be grown from is modified to promote the morel’s sexual cycle: the growth of ascocarps (these are the fruiting bodies mentioned previously, in which they contain the meiotic ascospores). On top of modifying the soil’s nutrient content, other exogenous nutrients are removed. Forcing the sclerotia, and sequentially the mycelia, to develop the desired ascocarps is the addition of high water levels within the soil; this is supposed to give the fungus a sort of “shock” in triggering/inducing ascocarp growth. Ascocarp growth is indicated by the appearance of primordia, which will then further develop into mature fruiting bodies. Other factors such as air temperature, soil and air moisture levels, fatty acid concentration, and proper ventilation are maintained throughout the primordia development, aiding in the maturation of fully-formed ascocarps.

If you were to pick them au naturel, one must be very careful. When picking blushing morels from the forest floors, one must be able to differentiate them from poisonous mushroom species that look similar to the real thing. The two major fungal genus that has been laying claim on blushing morel pickers are the Verpa and the Gyromitra species. Both have those membranous veins similar to that of the morel’s, but they do have some distinct features that set them apart. Most of the Verpa species do not have a hollowed centre nor do they have a honeycomb-like shape to their veins. And with the case of Gyromitra species, they tend to appear as if they have been folded to look like collapse soufflés!

All in all, the red-brown blushing morel is a must-eat food, albeit expensive and rather difficult to attain. If you do ever get the chance to eat one raw or sautéed, go for it! These can be prepared in virtually any dish you can think of, adding that extra complimentary succulent taste to the rest of the dish. If hunting for them is what you seek, be wary of the what you pick! It is best to go with a friend that can confirm whether or not what you’ve picked is the real deal, and also to have an extra pair of hands to pick twice the amount!

This work by Alexander Douglas is licensed under a Creative Commons CC-BY Attribution 4.0 International License.

The Tsetse Fly: A Scourge of Sub-Saharan Africa