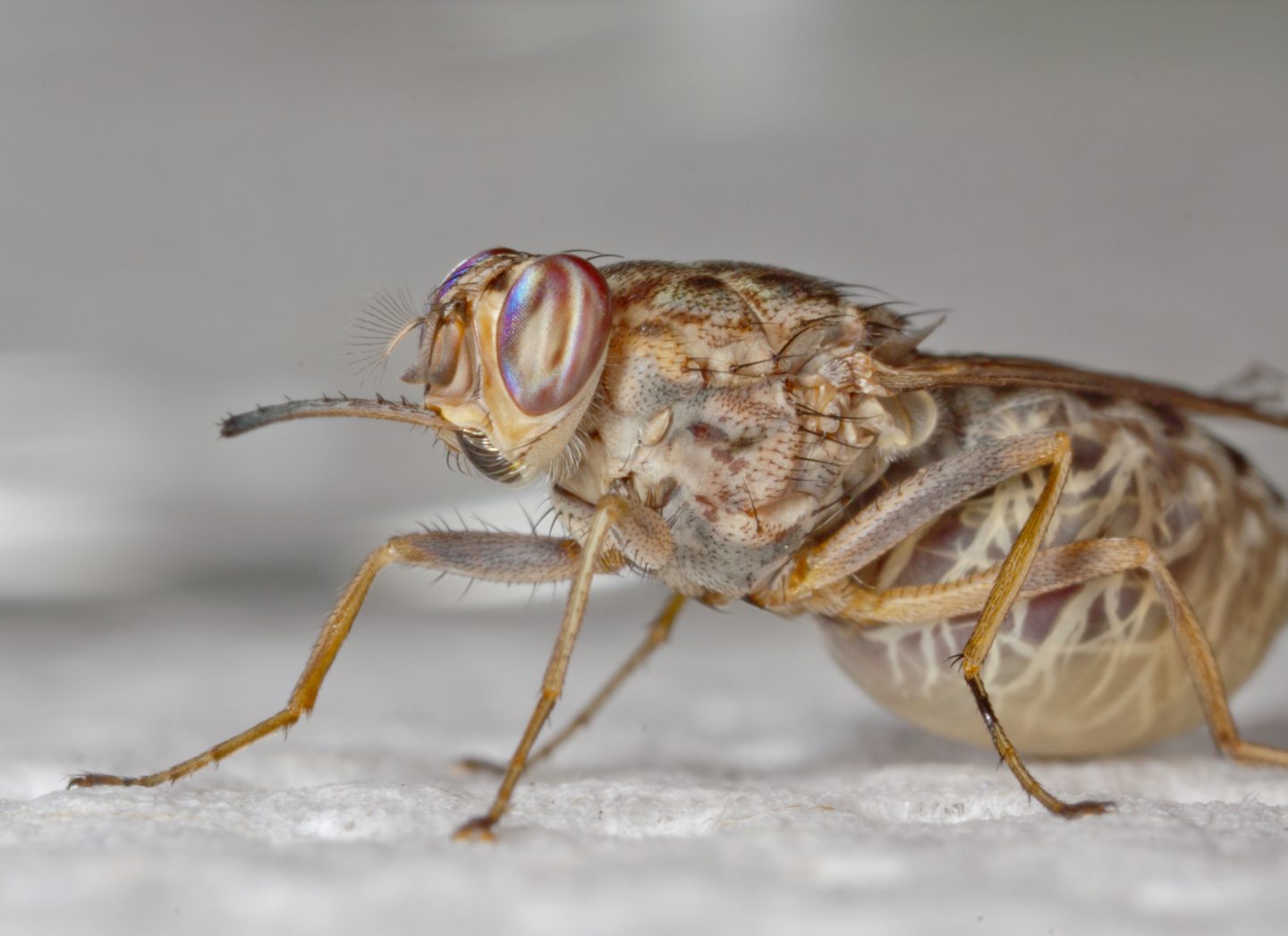 The Tsetse Fly: A Scourge of Sub-Saharan Africa

A tsetse fly is a small inconspicuous looking Dipteran, not dissimilar to the average housefly, however this fly is responsible for suffering due to poverty and illness in millions of people across sub-Saharan Africa. Tsetse flies encompass 32 species that belong to the genus Glossina, this group of flies are slow-reproducing haematophages (Leak 1998). Unlike most insects tsetse flies are described as k-strategists, this is because female tsetse flies become pregnant with a single offspring at time, which is provided with nutrients over the course of 10 days as the offspring goes through several stages of development. After the pregnancy period, the female lays a fully developed larva into the soil where it will pupate over the course of a month into an adult fly (Leak 1998). To provide nutrients to their growing offspring female tsetse flies must obtain bloodmeals biting many animals over the course of their lifetime, this makes them a perfect candidate for vectoring bloodborne disease.

Tsetse flies act as a vector for the bloodborne protist parasites collectively known as trypanosomes. Infection with trypanosomes produces the disease trypanosomiasis known by the common names “sleeping sickness” in humans, and “nagana” in cattle. Trypanosomes are taken up by tsetse flies when they bite infected animals or humans and spread the disease to other individuals in subsequent feedings. Infection with trypanosomiasis produces a variety of unpleasant symptoms including fever, severe headaches, irritability, extreme fatigue, swollen lymph nodes, and aching muscles and joints, if left untreated the disease causes nerve degeneration resulting in personality changes, confusion, other neurological problems followed by eventual death (CDC 2012).  Trypanosomiasis comes in 2 distinct strains: Gambian sleeping sickness for which humans act as a reservoir causes chronic infection and slow nerve damage resulting in death after a number of years, and Rhodesian sleeping sickness which is spread from cattle to humans and causes death in under 6 months (Welburn and Coleman 2015). Sleeping sickness is a deadly disease however effective treatments for humans are available but due to widespread misidentification of the disease and lack of government funding for treatment programs many people go untreated, it has been estimated that as few as 10% of cases are reported (Welburn and Coleman 2015).

While the effects of sleeping sickness may sound severe it is the indirect effects that cause the most harm. Tsetse flies and the trypanosomes they spread cause the deaths of millions of cattle each year, and while treatments are available trypanosomes become resistant to the drugs which must be constantly administered and are costly (Malele 2011). The result is sick cattle which cannot plow, produce less milk, and suffer high rates of abortion, often resulting in their slaughter (Regassa and Abebe 2009). All of these outcomes come at a great cost to farmers. The presence of tsetse flies often results in farmers having to plow their lands themselves which increases risk of exposure to tsetse bites, and reduces crop yields significantly.

The slow reproductive rate of tsetse flies along with the education and inclusion of farmers in tsetse control has resulted in the development of many tsetse control efforts (Pokou et al 2009). Controversial methods of controlling tsetse fly populations have been used in the past including the removal of vegetation and the destruction of wild host animals resulting in reduced habitat for tsetse flies and fewer carriers of trypanosomiasis, however the killing of wild animals and clearing of land over large areas had profound effects on ecosystems and is nowadays avoided (Malele 2011). In modern times insecticides have been used to kill tsetse flies through aerial spraying or application to the ground in known resting sites, these methods have shown effective in removing flies from an area but do little to prevent their return to the area through migration from other populations (Malele 2011). Traps have also been developed to attract and kill tsetse flies, such traps target the sensory biases that tsetse have towards blue colours and black shapes to entice the flies onto insecticide cover surfaces or unescapable traps which can be used to estimate population densities (Malele 2011). Simpler methods of baited traps include simply covering cattle in insecticides via spraying or pouring, this method has the added advantage of killing other parasites like ticks and is easily adopted by farmers (Malele 2011). The final and possibly most interesting method of tsetse control that has been implemented is the sterile insect technique wherein sterile male tsetse flies are raised in captive facilities and released into the wild to mate with female tsetse flies resulting in infertility for their remaining lifespan. The sterile insect technique is capable of collapsing populations but only works effectively when the number of sterile males released outnumbers the fertile wild males meaning it is best used after other methods of control have reduced tsetse fly populations (Malele 2011).

Many of the aforementioned techniques have been very effective in controlling tsetse populations and the spread of trypanosomiasis. A study done by Regassa et al. (2009) in Ethiopia assessed the impact of tsetse control by comparing areas in which tsetse control had begun in 1986 with areas in which no control had been performed and the results were staggering. The study found that calving rates, mortality rates, milk production, traction power and area cultivated per animal were all significantly higher in tsetse controlled areas, and most importantly tsetse controlled areas’ average cultivated land per household was 145% larger than in infested areas (Regassa and Abebe 2009).

While controlling tsetse flies has been effective in some areas it is not without its difficulties. Large areas of land have been put aside in many parts of sub-Saharan Africa as protected lands, game reserves, and national parks; while these areas are meant to act as safe havens for threatened animals they also provide the tsetse fly with undisturbed and untouchable habitat in which to breed safely (Malele 2011). Many governments in sub-Saharan countries lack the funding or the desire to enact tsetse controls leaving farmers and non-government groups to fund these operations themselves, this makes tsetse control very difficult as this wide-ranging insect cannot be permanently controlled without a widespread and unified effort.

Great strides have been made in combatting the scourge of tsetse flies and trypanosomiasis but without changes to government investment and co-operation in tsetse control it is unlikely we will ever see this pest eradicated.

This work by Max Zerr is licensed under a Creative Commons CC-BY Attribution 4.0 International License.