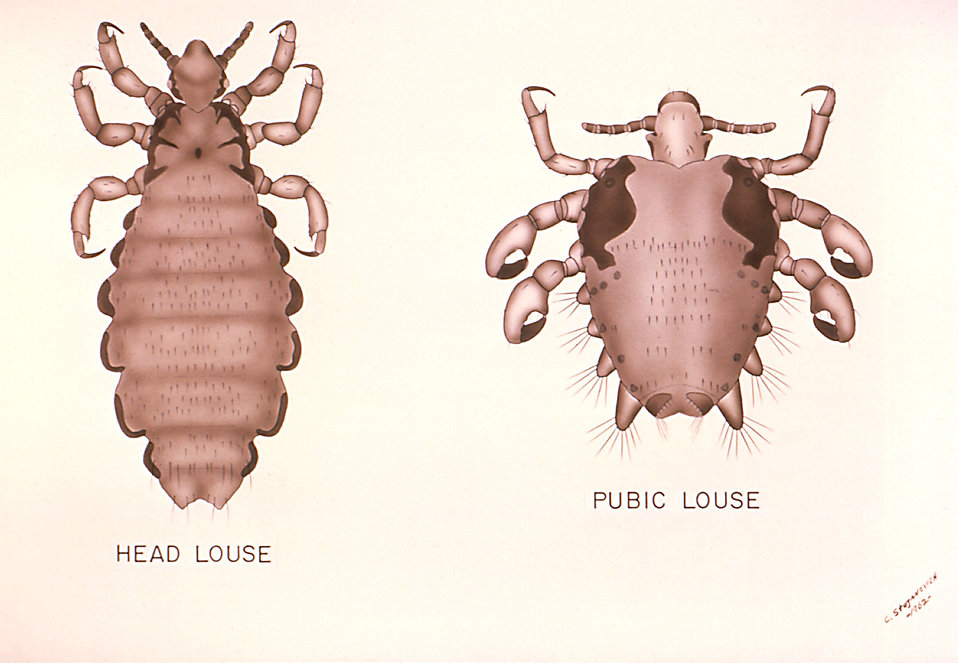 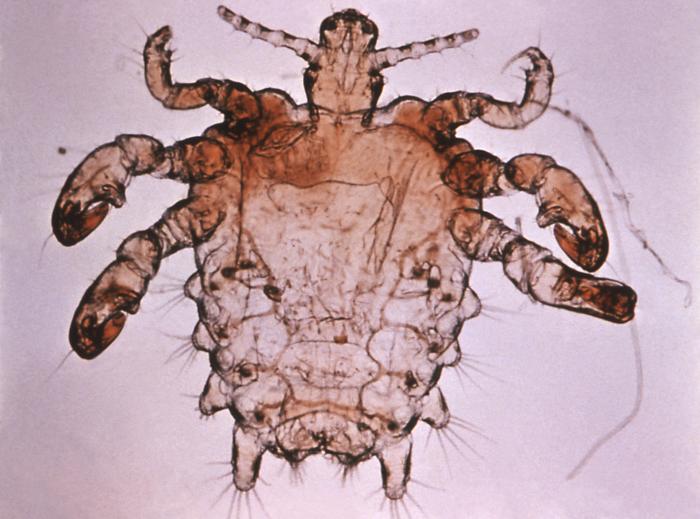 Pthirus pubis, otherwise known as the crab louse is considered to be quite the annoying pest for humans. As an obligate ectoparasite of humans, we are the only species that have to deal with these particular type of lice. The crab louse is not your common everyday louse and is more well known as an STD in today’s society. The crab louse thrives in unsanitary conditions that are often overcrowded, and thus increasing the rate of infection. Places such as prisons, refugee camps  and overcrowded cities are a few examples that have been noted to experience outbreaks in the past. These particular lice can be found all over the world and are not limited to only a single region  (Dewey S 2001).

Distinct features of the Pthirus pubis:

Lice cannot live apart from their hosts. The crab louse, like other lice, is small and wingless and spends the entirety of its life on its intended host (Weiss R A. 2009). It is approximately 1.25 to 2mm long and survives by feeding on the blood of their host. Both the males and the females share similar appearances and are considered to have sexual dimorphism. They tend to have a short lifespan, living only for about a month, and dying once they reproduce. If separated from their host they will also die rather quickly, only being able to survive for approximately 24 hours. (Dewey S 2001).

Although found all over the world, the crab louse is more abundant in both the United States and Western Europe, and actually has some interesting traits. Pthirus pubis has an overall negative impact on humans as an ectoparasite, but surprisingly some of these negative traits can actually be used for some benefit. As I’ll go into later, the infection of the crab louse can actually be used as a fascinating indicator of sorts (Pierzchalski J L et al 2002).

The Pthirus pubis as an STD, is transmitted sexually, this means that the lice are most commonly found infesting the pubic hair of their host. Although in some cases they have been found to infest the eyelashes, moustaches or beards of their host and in some very rare cases, they have even been found within the nose of the infected person. A case report of a 15 year old girl, found an infestation of the nose, something that had never occurred before (Duraipandi K et al 2016). Pthirus pubis have a modified pair of legs that are used for holding onto the hairs of their host, and their other legs are used to cling to the host themselves. From this point the louse is free to feed on the blood of the human, injecting their saliva into the skin, causing itching and irritation. In infected children, who have yet to fully develop, the lice can be found infecting the eyelashes or the eyebrows. This is usually recognized by the appearance of a yellow crust on the eyelashes, and any oval globules with a grey colour are eggs that are attached to the infected hairs (Robinson A J. and Ridgway G L. 1994). Pthirus pubis  have the ability to produce about 30 eggs within their lifetime, and become sexually active after about 23 from their hatch day, and because of this they can rapidly spread their infection (Dewey S 2001). 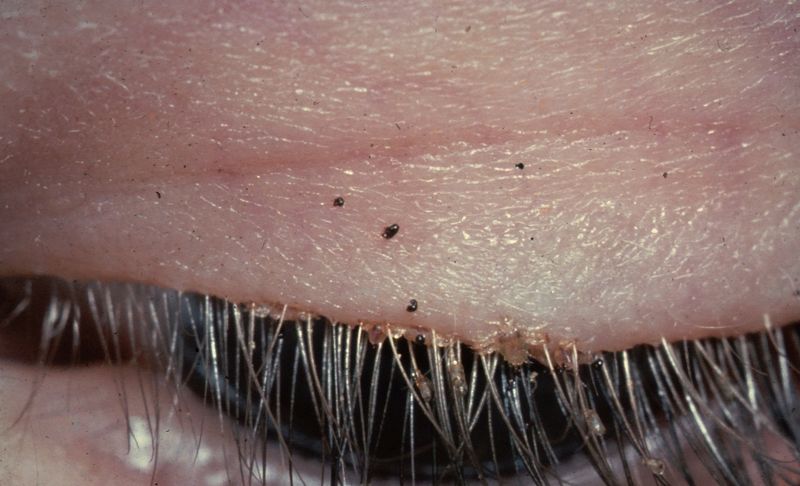 Figure 2. Infection of crab louse on the eyelashes. By KostaMumcuoglu. CC BY-SA 3.0

Now as I mentioned earlier, these particular lice do have some interesting traits to go along with their annoying ones. It has been found that the infection of the eyelashes can be seen as an indicator of sorts. In young children it can mean a possibility of child abuse due to the conditions in which a child would become infected (Burns D A 1987) and (Robinson A J. and Ridgway G L. 1994). In adults, the infection of the eyelashes can be used as an indicator for other worse STDs (Pierzhalski J L 2002) and (Dewey S 2001). Now although neither of these can necessarily be considered a good thing, they can be used as reduce future harm. Identifying the infection of the eyelashes can help doctors to know that they should look for other sexually transmitted diseases that may be present and causing harm. Studies were done that found that out of those tested with pubic lice, 38% had another STD present at the same time. The most common being gonorrhea, although there are several others as well. The STD present and who was infected, changed depending on the gender of the host, as females, for example, had higher percentages of being infected with gonorrhea  as well (Pierzhalski J L 2002). The majority of infections tend to occur in people between the ages of 15 and 25 years old, and are often paired with syphilis and gonorrhea as was found during a 14 year study (Varela J A 2003).

After hearing all the negatives that the crab louse has to offer, it seems that some good news is needed, and that good news is that treatment does exist to deal with these pests. As with regular lice, there are a few different solutions to deal with them. In particular, forceps can be used when dealing with eyelash infections. As there are fewer hairs to deal with, forceps are quite common for the removal of the lice and eggs. There also exists, a yellow mercuric oxide eye ointment, that can be used for the infections of the eye lashes as well (Burns D A. 1987). A few self-treatments have also been found to have positive results, such as using hydrocortisone on the bites or a bath in water with a little bit of bleach or lysol. There are also commercial products such as creams and shampoos that are sold to help deal with the infestation, and have been found to be quite effective (Anderson A L and Chaney E 2009).

I am pretty sure it goes without saying that the Pthirus pubis is a pest in today’s society, and it is unlikely for that to change anytime soon. The crab louse has an overall negative impact on humans ensuring it’s pest title. Even with certain traits having some unusual uses, such as being used as an eyelash indicator, they are not enough to be considered a positive to humans, as they only help in lessening other negative effects. With that, I feel that I should leave you off with some words of advice. Remember, personal hygiene is important, and try not to get too carried away on Friday night as you never know where the notorious crab louse could be lurking. That is all and I hope I haven’t frightened anyone too much.

This work by Shailina Sarrazin is licensed under a Creative Commons CC-BY-SA Attribution-ShareAlike 4.0 International License.