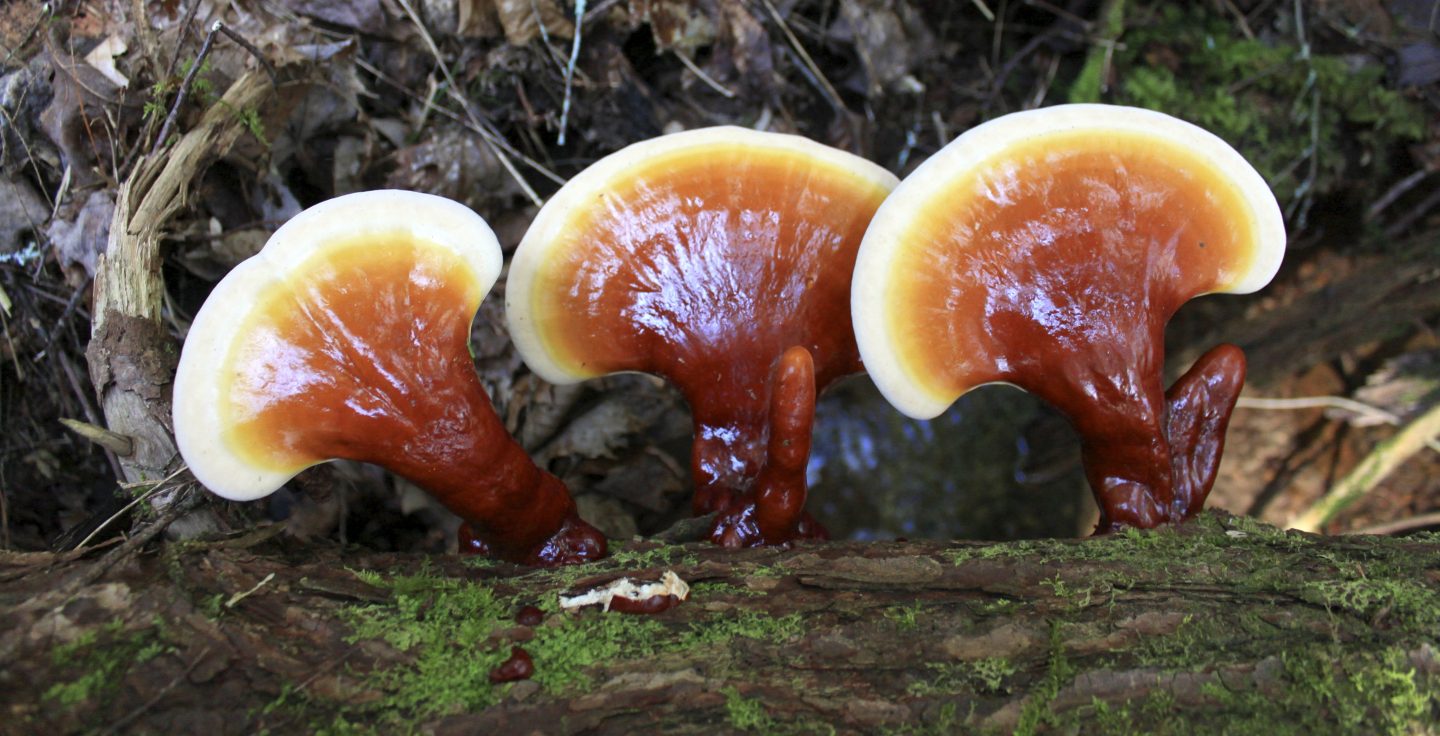 Fungi are most often found in the hands of mycologists or chefs, however research into new applications is becoming increasingly popular within this diverse group of organisms. The basidiomycete Ganoderma lucidum is a tough corky polypore with a shiny, varnished upper surface that is red, orange, yellow, and white in colour (Arora 1986). It is distributed worldwide and is generally found on stumps, roots, and the base of hardwoods (Arora 1986). This fungus may be better known by names such as Lingzhi or Reishi (Paterson 2006).

Ganoderma lucidum is an ancient medicinal mushroom that has been used for nearly 2000 years in Asia (Paterson 2006). Ancient Chinese texts claim that consumption of this fungus supplements the center, sharpens the wit, and improves the memory (Shouzhong 1998). The Chinese name “Lingzhi” translates to the “mushroom of immortality” (Arora 1986). More recently, historical medicinal traditions have translated into the modern supplement market, as G. lucidum powder capsules can be purchased at nearly any health foods store across the world (Paterson 2006). Different health advice websites claim that the fungus fights cancer and allergies, has life span-extending properties, and can treat anxiety, among other capabilities. In terms of the validity of these claims, some scientific research has been conducted to demonstrate the antitumor, antihypersensitive, antiviral, and immunomodulatory effects of compounds isolated from G. lucidum (Boh et al. 2007). 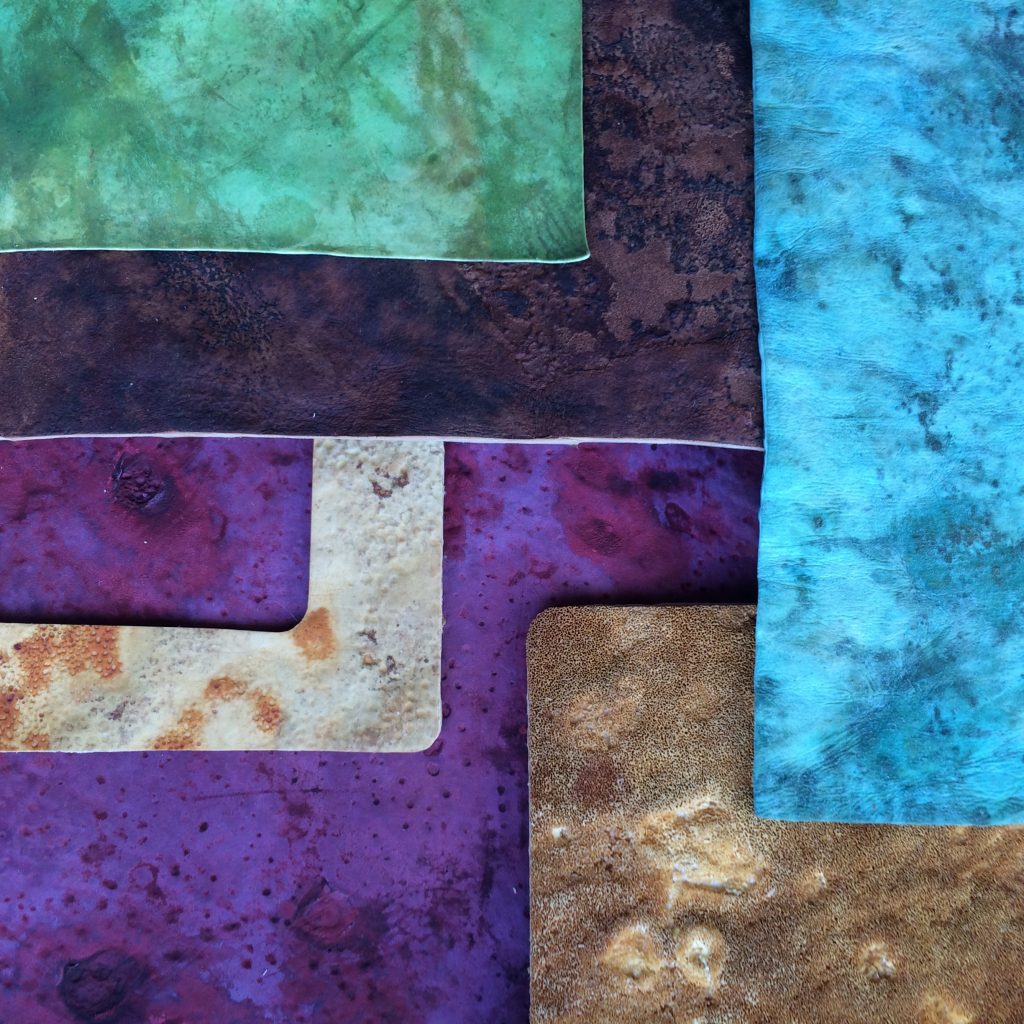 Although this fungus is widely famous for its therapeutic effects, it has more to offer than just medicinal properties. In particular, the mycelium of this species of fungi and others are increasingly being used for a wider range of applications in the bioengineering of products. One of these products is a leather replacement material produced from the mycelium of G. lucidum by the startup MycoWorks. Their leather is highly customizable, with a range of colours and patterns (Fig. 1) and can be grown to nearly any size or shape (MycoWorks 2016). It is breathable, water wicking, and naturally antibiotic, all without the addition of any chemistry (SciFri 2016). This leather is created in a carbon negative process, which begins with the inoculation of agricultural wastes with G. lucidum spores (SciFri 2016). Next, the mixture is placed into a controlled environment to alter temperature, humidity, light and gas availability to ultimately transform the mycelium cells from their basic state into a material that can be molded into leather (SciFri 2016). This is a closed-loop production process, meaning that the process is zero-waste, as the same agricultural waste can be used multiple times and the resulting product is completely biodegradable (MycoWorks 2016).

The sustainability of this leather replacement is imperative to combating the current cruel, wasteful and irresponsible leather industry that currently exists. Producing leather from animals requires a considerable amount of resources in the form of water, feed, and time (Steinfeld et al. 2006). One cowhide takes around two years to produce, while a mycelium-derived hide of equivalent size takes a mere two weeks (SciFri 2016). That is, for every one cowhide produced, 52 mycohides can be made in the same amount of time, while using dramatically fewer resources (SciFri 2016). The consumer demand for leather is increasing faster than the leather industry itself (IndieBio 2016). The mass production and increasing demand for leather products have tremendous negative impacts on animal welfare, the environment, and human health.

Animal welfare is of great concern in regards to the leather industry. The leather industry is inevitably linked to the factory farming industry as a byproduct (Verheijen et al. 1996). Factory farming practices are cruel to say the least, with dairy cows kept constantly pregnant and confined for the entirety of their lives (Keyserlingk et al. 2017), and cows reared for meat are castrated, dehorned, and branded, all without the use of anesthetic (Earthlings 2005). Although a massive amount of leather is produced this way in North America, over six times more is put out by Asia (FAO 2016). In India, unproductive cows are illegally trafficked from across borders where they are packed tightly onto trucks or forced to walk for days without food or rest (Rahman 2000). Many of these cows eventually collapse from exhaustion, and traffickers break their tails and rub chili paste in their eyes to force them to stand up and continue the journey to slaughter (Rahman 2000). The unnecessary suffering and abuse of animals must come to an end, and alternative methods of resource acquisition should be explored.

In addition to animal welfare, pollution is also a major issue with current leather production methods. Producing leather from a dead animal’s skin poses many obstacles, as we all know how quickly tissue tends to decompose. To preserve and strengthen the skin, it is treated with a multitude of damaging chemicals, and this process is referred to as tanning (Dixit et al. 2015). Western tanneries generate a large amount of waste products during the tanning process, but have strict regulations in place that dictate how to properly dispose of these pollutants (EPA 2016). Tanneries in Asia, however, often lack such rigid regulations, and as such, tanneries in this area are often far more environmentally detrimental (Azom et al. 2012). For example, many tanneries in the Hazaribagh region of Dhaka, Bangladesh dump tannery wastes directly into the Buriganga River (Fig. 2), polluting the local water supply, and leading to increased salinization, both of which can have damaging effects on surrounding ecosystems and communities (Azom et al. 2012). Additionally, chromium-laden solid wastes, such as hide trimmings, hair, sludge, and flesh, are dumped in nearby villages and burned or used as poultry feed (Azom et al. 2012). Air pollution is another environmental issue imposed by these tanneries, as harmful volatile organic compounds, such as ammonia and hydrogen sulphide, are released during the tanning process (Dixit et al. 2015).

Finally, human rights are yet another major issue with the leather industry, especially in developing countries. Many tannery workers do not wear any protective equipment when working with harmful chemicals, and furthermore, as seen in figure 3, workers can be found standing barefoot in pits filled with sulfuric acid and sodium sulfide which can burn skin, eye membrane, and respiratory tissue (Chowdhury [date unknown]). According to the World Health Organization, many tannery workers in the Hazaribagh district suffer from gastrointestinal and dermatological diseases, and a quarter of these workers are under 11 years of age (WHO 2001). They also found that 90% of this population does not live past the age of 50, compared to less than 60% for the country as a whole (WHO 2001).

All is not lost …

In conclusion, although the leather industry and all of its related issues are discouraging, it’s important to realize that we do have options and we can change. Our society needs to focus research efforts on more sustainable and less cruel replacements not only for leather, but for many other products tied to the destruction of our planet. Fungi has an enormous potential to fill countless roles in human society, such as absorbing farm waste, as an insecticide, and even as a renewable fuel source (Stamets 2008). By investing our interest and consumer dollars into products like G. lucidum leather and environmentally conscious companies like MycoWorks, we can vote for more sustainable and humane production methods for the goods and services produced in our society. A shift in these methods is on the horizon and only time will tell what fungi has in store for us in the future.

This work by Jocelyn Fors is licensed under a Creative Commons CC-BY Attribution 4.0 International License.