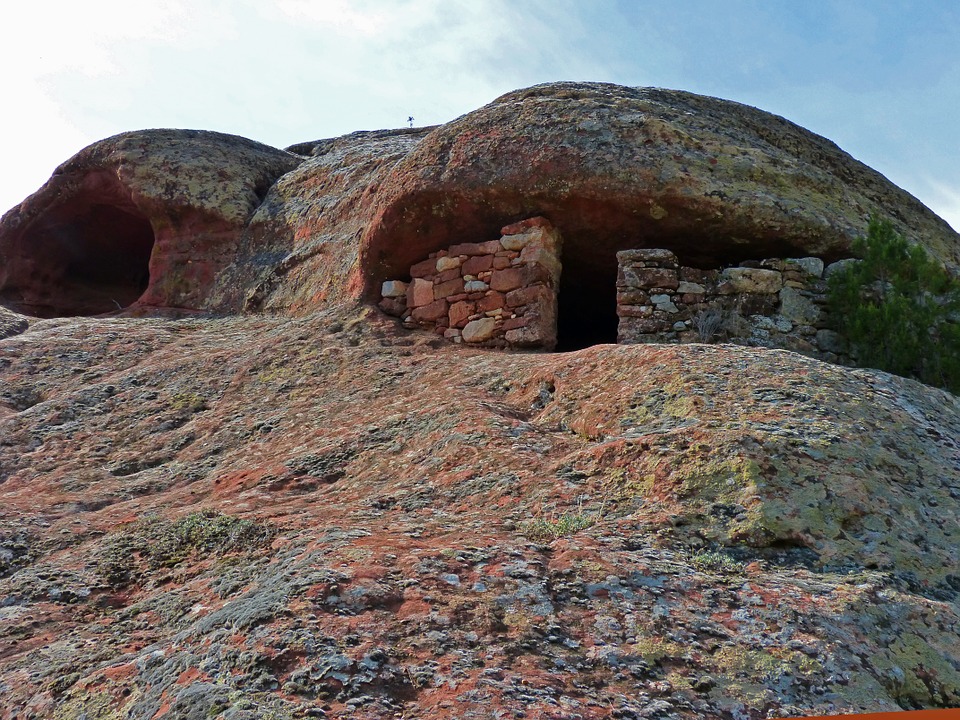 BREAKING NEWS: New cave discovered in Northern Alberta! Picture this, you are getting all your gear ready to go out on a new extravagant hike with your best friend, Mike who is a biology major. You start your extravagant hike, and are now surrounded by crisp, fresh air, and mountain rock. You and Mike are hiking to the peak of the Rocky Mountains reaching the area of the newly discovered cave, when all of a sudden the passage way is blocked! “WARNING: DO NOT ENTER- CONTAMINATED AREA”. A park official wearing a heavy duty mask walks up to you and Mike and tells you that the cave is contaminated with Histoplasma capsulatum, which causes an invasive infectious disease called “Histoplasmosis” so he advises you to turn around and go home. After this huge disappointment, you find yourself thinking: what the heck is histoplasmosis and why did it ruin such a great adventure? Luckily, Mike is familiar with H. capsulatum as he briefly learned about it in his Insects, Fungi and Society class he took last semester! 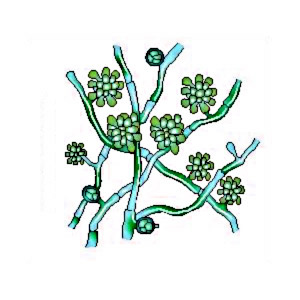 Histoplasmosis, is a fungal infection caused by an Ascomycota fungus: Histoplasma capsulatum. It can cause detrimental damage to the lungs and has been known to resemble tuberculosis.1 But before you start panicking about this infectious disease, it is important to note where it is most prevalent and the environments in which it strives. 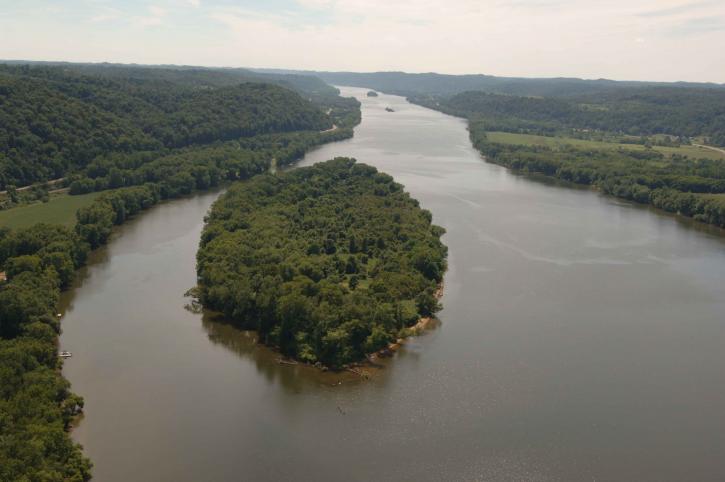 Histoplasma capsulatum is prevalent in temperate areas such as Latin America and the Ohio River Valley.2 Histoplasmosis is also commonly referred to as Cave’s disease and Ohio River Valley disease, as it is very prominent in that area. H. capsulatum is primarily found in areas of soil containing large amounts of bat guano or bird excreta.3 However, it carries the name “Cave disease” as it can be found in caves, since, well you know bats tend to like caves and while they habituate, they tend to leave behind a bit of guano… Interestingly, this fungus is prevalent in these areas such as the Ohio River Valley due to its moist and alkaline soils. It prefers to grow in areas that have a pH between 5 and 10 and its conidia can grow through either an asexual stage or a sexual stage, leaving humans, animals and others in society defenceless when it comes to their apocalyptic characteristics.4 Not only can H. capsulatum live in soil for months on end, they can also travel miles through air currents.4 This astounding form of transportation for their conidia makes transfection into hosts extremely easy as infection can occur by breathing in their spores.5

Major outbreaks of Histoplasmosis have been reported all over Latin America, such as outbreaks occurring in Costa Rica, Puerto Rico and even in Mexican caves.2 Furthermore, most outbreaks typically occur in Mississippi and Ohio. However, something I should mention is that histoplasmosis is not necessarily unique to these remote areas. There have been epidemiological reports on outbreaks of this invasive disease for many years, and other common places this fungus strives off of can be in buildings that are undergoing renovations or demolition, or even in farms that can contain chicken coups.6 In a study performed by Benedict et al. (2013) the epidemiological reports for histoplasmosis outbreaks between the years of 1956 to 2013 indicated that 77% of cases were associated with the exposure of bird or bat droppings mostly when people were leisurely walking through the contaminated areas such as along the river valley or in caves. Now that we have an idea of where the most prevalent areas of histoplasmosis are, what is this fungus and why can it cause such an aggressive infection to humans and other animals?

The Harmful Effects of Histoplasmosis:

What would happen if you were accidentally exposed to H. capsultum and inhaled some of its microconidia spores? Well, first of all, the morphology of this fungus is extremely fascinating. H. capsultum is at thermally dimorphic fungus that can convert itself to yeast when at temperatures of 37oC (i.e. body temperature).7,8 The main reason Histoplasmosis can become a very invading infection is since it can adapt to yeasts’ highly replicative asexual stage and grow in vast numbers over a short timeframe.8 There are different forms of clinical manifestations that can occur for a person who has contacted Histoplasma.7 It has been recognized that patients who are immunocompromised, or immunosuppressed, such as elderly patients or HIV/AIDS patients, can develop a chronic form of pulmonary histoplasmosis.7,9 The first manifestations of this chronic form occur with the inhalation of the fungus’ microconidia as they reach the lung’s alveoli from inhalation (as seen in Figure 3). From there, the microconidia are ingested by macrophages (the garbage bag of the cell) and inside these macrophages the microconidia are transformed into yeast.7,8,9 Within these macrophages, the infectious yeast can be carried through the lymphatic system and spread to other areas of the body.10  The manifestations seen in the pulmonary system is why histoplasmosis can resemble tuberculosis.1 Most patients who have contacted this fungus also display no symptoms or very mild symptoms making it more difficult to detect.7 However, humans are not the only ones that can be impacted by the chronic effects of this fungus, in fact many animals, specifically dogs have experienced many cases of histoplasmosis. Perhaps this is because while you are walking your dog on a beautiful, humid day, they may be stuffing their noses in soils rich with H. capsulatum. 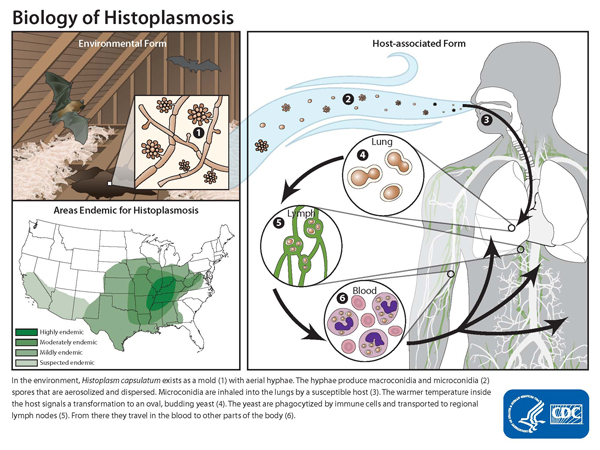 Effects on Other Animals:

For animals such as dogs, the implications caused by histoplasmosis infection are very similar to the manifestations seen in humans.11 The symptoms for dogs can vary however, but most healthy animals recover from a milder form of respiratory infections on their own. Just like humans, dogs or other pets, such as cats, that have a particularly deficient immune system will have more severe cases of the infection that have been known to spread to the gastrointestinal system, lymphatic system, and other organs such as the spleen, liver, and eyes.11 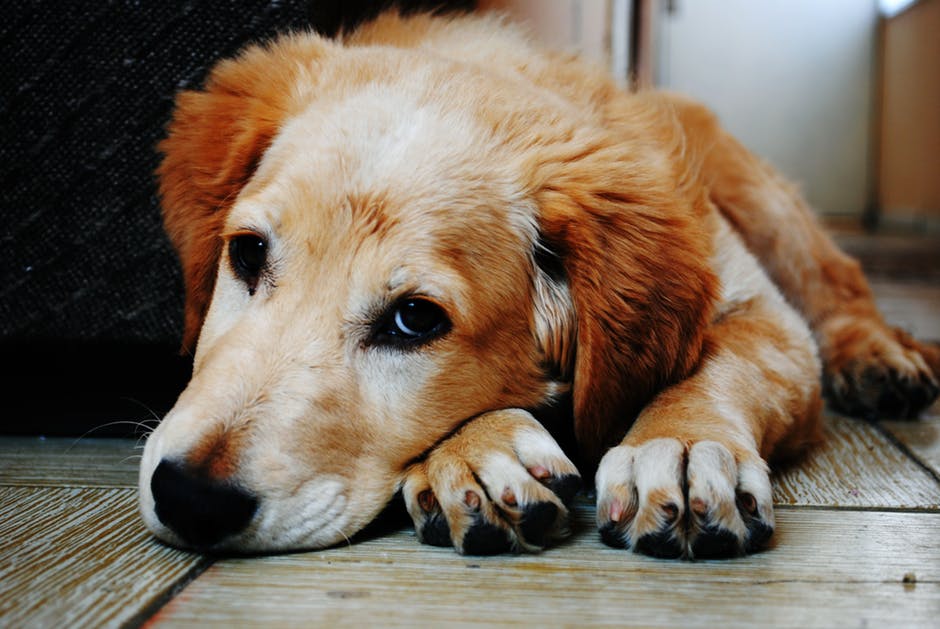 Before you get super worried about contracting H.capsulatum, it is good to know that treatments for this fungal infection are very easy and efficient. There are numerous anti-fungal treatments available, but most commonly used treatments include the use of itraconazole and amphotericin B.12 Itraconazole is typically used for mild to moderate pulmonary infections, while amphotericin B can be used to treat more severe cases of infection. Treatments are very easy to administer, as these antifungal drugs are available as pills.

Although, most cases of histoplasmosis are mild to moderate, the most vital part of treatment is avoiding it all together. Therefore, we as a society have developed great preventative measures from ever contracting H. capsulatum.13 But, on the odd chance that you are exposed while in an endemic area, you can feel comforted knowing that there are treatments available.

While Histoplasmosis can sound like a frightening disease, the chances of catching it are rare due to its epidemiological reports and its localization within remote areas. Before you vow against ever entering a cave again or going to visit the Ohio River Valley, it is essential to remember that histoplasmosis does not affect healthier individuals as chronically as immunocompromised individuals. Also, treatments for the infection are very easy to administer. Furthermore, there are great preventative measures that can be utilized by wearing appropriate masks and breathing fresh air while in contaminated areas. The important thing is to remain adventurous but to remain cognizant of these microscopic fungi that really are the true conquerors of our world!

This work by Selenne Dorus is licensed under a Creative Commons CC-BY Attribution 4.0 International License.