The Himalayan Cliff Bee is found in a small forested area in the centre of the Nepalese Himalayas northwest of Kathmandu. These 3 cm long bees have a special relationship with the Tamu-mai, a tribe also known as the Gurung people or Himalayan honey hunters. These people have a close connection with these bees for one main reason: mad honey (Ahmal et al, 2003). 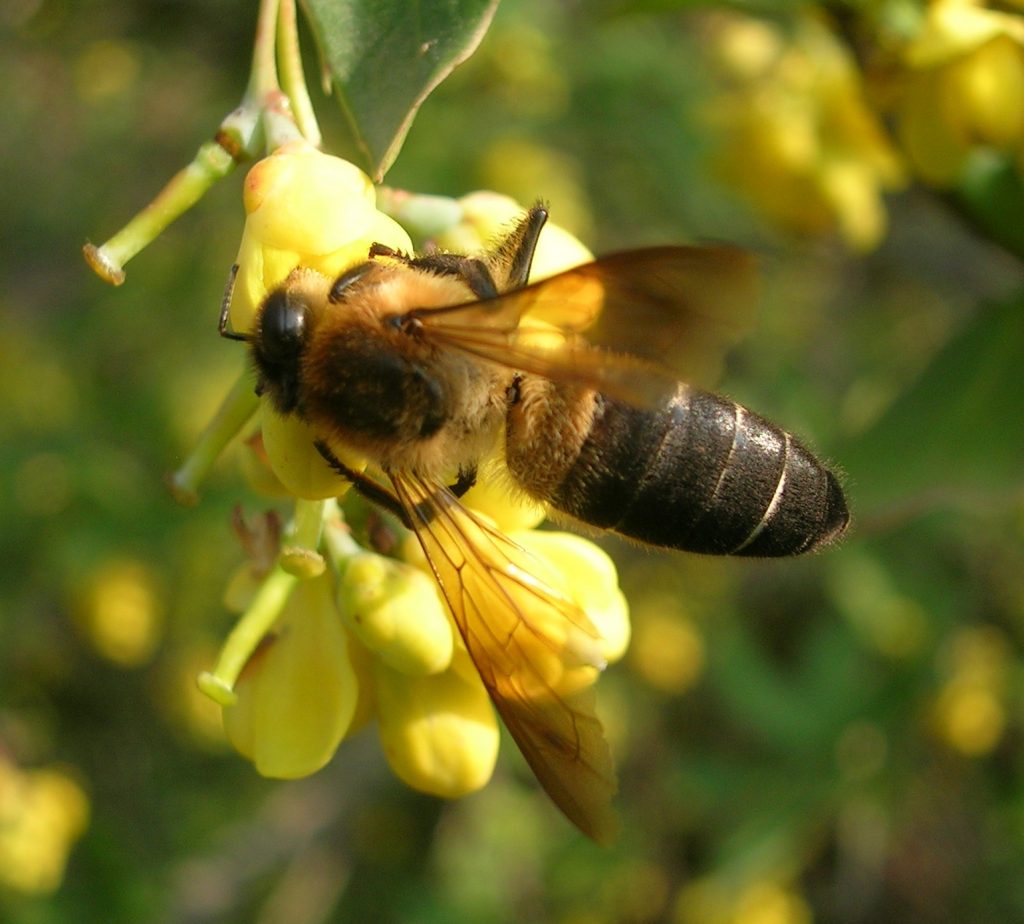 Apis dorsata has several subspecies spread out across Asia. The Himalayan Cliff Bee is currently classified as the laboriosa subspecies. Although, there has been a fair amount of literature written about this kind of bee, there has been an ongoing debate about whether this bee is a dorsata subspecies or an Apis species of its own. So the data gathered on this bee has been published under one or the other over several decades.

Apis. d. laboriosa build nests appropriate for the warm, damp climate in which they live. Their territory is at around 1500m elevation. The higher monsoon rainfall levels in this area have led to a forest markedly different than other, drier Himalayan forests (Strickland, 1982). Each colony works together to build one massive sheet of honeycomb that hangs from a tree branch or rocky outcrop on a cliff face. They do not have to deal with colder temperatures and therefore don’t need to nest in a cavity like other species. One of these semi-circular honeycomb sheets can weigh 60 kilograms when full of honey!

Their environment likely makes this species different from other honey bees in a few ways. Their open style of hive has led them to develop aggressive defense tactics and become physically stronger.  Multiple colonies prefer to congregate together on one tree or cliff face. The colonies are also migratory and will follow the queen back to a previous nest even after up to 18 months (Ahmad et al, 2003).

Grayanotoxins, found in the nectar and pollen from Rhododendron ponticum flowers which bloom in the area, are concentrated when the nectar is made into “mad honey.”  Grayanotoxins are neurotoxins that do not affect the bees at all but affect mammals by blocking sodium channels within the phospholipid bilayer of cells. This causes an interference with the transmission of the electrical energy between cells. The result is several seemingly unpleasant side effects such as dizziness, weakness, vomiting, low blood pressure, sweating, reduced heart rate, and hallucinations (Demir et al. 2011). Mad honey can also cause “impaired consciousness,” and fainting. Even with these worrisome side effects, no deaths from ingesting mad honey have ever been reported. There aren’t any lasting side effects after the grayanotoxins have left the body. However, in emergency situations grayanotoxin poisoning is very hard to recognise as it presents with symptoms seen in many other situations. The Rhododendron ponticum flower is found in several countries around the world and in each place the concentrated grayanotoxin honey, produced by various species of bee, is intentionally collected for its effects. Mad honey poisoning is still commonly encountered in Turkey by both humans and domesticated animals.

In one case report from 2011 by Yarlioglues and their colleagues titled “Mad-honey sexual activity and acute inferior myocardial infarctions in a married couple,” the couple told the attending at the hospital that they were taking the honey to increase their sexual performance.  They decided to increase their dose from a teaspoon to a tablespoon three hours before being admitted. This high dose stopped the flow of blood to their hearts and caused heart attacks. I found this case informative and also amusing. This was the only paper I found that stated people are taking mad honey to increase sexual performance. It does lower your blood pressure like Viagra so there may be some merit to this idea.

The Gurungs use this honey for medicinal purposes and in certain rituals. It has significant phenolic levels and therefore is an effective antiradical, antimicrobial and antioxidant (Silici et al, 2010). The Gurungs are also able to sell mad honey for upwards of four times the regular price of honey on the international market. Yes, that’s right, people pay good money to ingest mad honey just to throw it back up! One hundred grams of honey can be purchased online for a whopping $99.00 USD. This amount of money goes a long way in Nepal and the Gurungs are increasingly collecting the honey to sell and not for their own use. This is a very real threat to the Himalayan Cliff Bee as the increased honey harvesting is unsustainable. Another threat looming on the outer edges of the cliff bee’s habitat is deforestation. Forests are being cleared for agriculture as Nepal’s population continues to grow.

The honey harvesting techniques have not changed in hundreds of years. The Himalayan honey hunters have had a close relationship with the bees since settling in the region in the middle ages. They scale rope ladders 25 metres up the cliff to break pieces of the comb off using sharpened 3 metre long bamboo sticks. They will light fires with green leaves at the base of the cliff to smoke the aggressive bees. The gurungs often just chew the comb raw. They say that the A. dorsata honey is less sweet than the honey from the domesticated A. cerana they keep in their villages. Sometimes mad honey is called “bitter honey” as it is less sweet than other honeys and leaves a burning sensation in your throat when you eat it. There are several legends and rituals associated with the annual hunts. Including animal sacrifices which are often made before they climb the cliff to appease the forest spirit. This offering is then eaten by the hunters to make sure they have enough strength for the harvesting (Strickland, 1982). Increased tourism allows for new generations of traditional honey hunters and is actually promoting the conservation of the species.

It seems mad honey has the potential to be used in western medicine if further research is done. However, as in many parts of the world, the endemic flora and fauna in the Kaski region of Nepal are being threatened by human interference. The Gurung culture and the native species, interwoven in their practices, hang in the balance.

This work by Alicja Muir is licensed under a Creative Commons CC-BY Attribution 4.0 International License.