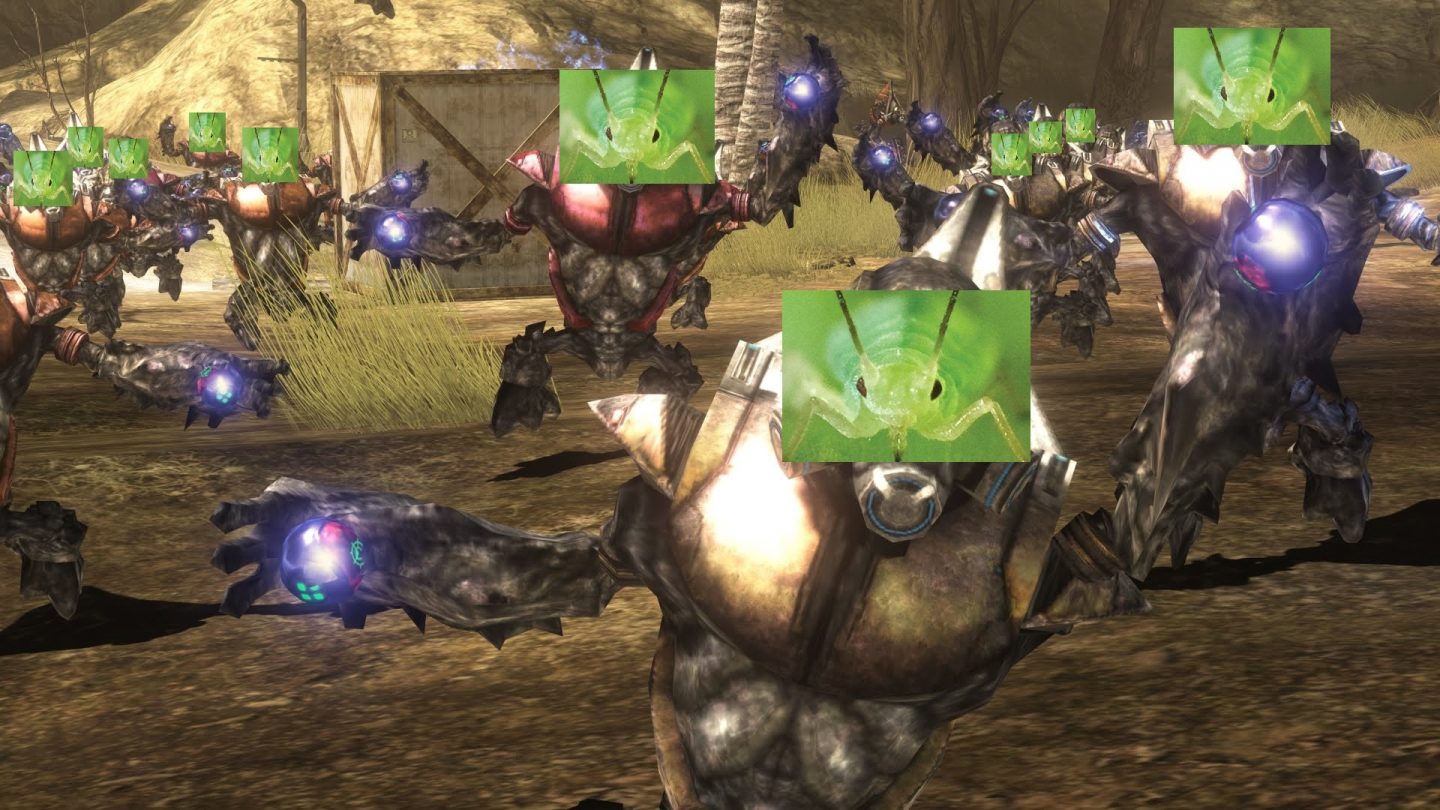 Waves of horrible monsters attempting to swarm you and destroy everything in sight. Different kinds of invaders assaulting beleaguered defences from every direction while exhausted defenders fight the war that they know that can’t truly win. The foe takes many forms. They strike from above and below, some with stealth. Some rely on speed. The most advanced shrug off the defender’s best efforts through experience and adaptation.

Like any proper grunt, they eschew advanced tactics in favour of massed wave attacks. They accept massive casualties knowing that some will make it through. During the campaigns of the summer season they amass their numbers through parthenogenic, viviparous reproduction. Live young, simply tiny versions of the adults, are born from females alone. These clones take advantage of prime conditions to expand the population by orders of magnitude. Then when the conditions invariably worsen in the fall the all female population produces some males to mix up the genetics and lays eggs that weather the hostile winter weather.

They do possess some interesting traits as part of their singularly boring existence. Some have wings and are capable of poor but passable flight allowing them to spread more than their tiny legs allow. Their diet of sap is so low in nutrients that they have to excrete most of the sugar in order to extract enough nutrients. In some cases ant colonies will “farm” populations of aphids. Collecting the waste sugar the aphids can’t use and placing them in good areas to leach sap. Essentially, Aphids are the big dumb cows of the insect world, except they are small.

This raises an important question. If aphids are so slow and weak, how are they winning? I found the green apple aphid (Aphis pomi) to be a particularly interesting example of this question. A very standard aphid species they live on apple trees, as one would expect, as well as the nearby shrubs. An otherwise unexceptional aphid species they are enthralling for the sheer number of ways we have attempted, and mainly failed, to murder them all in the name of research.

Surely it will be a breeze to spay pesticides for a pest that barely moves and can at best escape predators by falling off the plant. Yes, yes, it is. For home gardeners, they are a minor nuisance at their worst. With a simple spray bottle and one of dozens of natural and synthetic pesticides the vegetable garden can be saved. For agriculture, the pesticides are equally effective at killing every exposed aphid. The issue is that the aphids can handle the damage. If even a few are missed by the spray they reproduce so quickly that the population often ends up larger due to the reduced competition.

Predatory Species – Feed them to Something

Everything likes to eat aphids. When you poop sugar and have no defence there aren’t many predators that find you unappealing. Both ladybeetles and hoverfly larva are popular natural population controls released in large numbers to protect crops. Both species target aphids when they are available. This biologic control works quite well so long as the population is kept low enough that the predators can keep up. Aphids are amazing at reproducing and given a head stat they will reproduce faster than the predators can eat them. Why bother with fancy defences when you can just out breed your predators. A long term strategy has been proposed where you grow shrubs to house spiders and other predators all year in the hopes of keeping the population small to start with.

So, there are so many aphids that the predators are full. The aphids are jovially sucking the trees dry. Clearly, we need something that can reproduce as fast as the aphids. No better choice than a parasite. Specific to the aphids and capable of reproducing as fast as the population of aphids will allow. The choice is obvious but biology is never that simple. Hyperparasites are the next level of parasite. They help the aphid population by weakening the parasites. This second level parasitism allows the aphids a second population explosion as the parasite population collapses.

Some progress has been achieved in identifying and cultivating apple trees that are slightly more resistant to aphid infestations. While this does slowly increase resistance, it does not have huge effects. Cultivating non-obvious traits is expensive due to the genetic testing it requires and the benefits are limited. Investigations into GMO aphid resistance has potential but are prohibitively expensive.

Why if aphids have no defences are we so bad at dealing with them? Simply, there are so many of them reproducing so quickly that we can’t kill them fast enough or completely enough. What does it mean that we can’t even deal with the weakest and least advanced pest? Considering we have never actually managed to exterminate any pest species we are clearly not the biologic masters we sometimes pretend to be. The hungry hordes may forever be at the door.

Wyss, Eric. (1995). The effects of weed strips on aphids and aphidophagous predators in an apple orchard. Entomologia Experimentalis et Applicata, 75, 43-49.

This work by Matt C is licensed under a Creative Commons CC-BY Attribution 4.0 International License.